4 Most Common Types of Keys

Most people hold several different keys with vastly different purposes at any given time. Should the need arise to go to the local locksmith service for a change or replacement, knowing the name of the lost item as well as being able to explain clearly what it was used for is a big advantage. 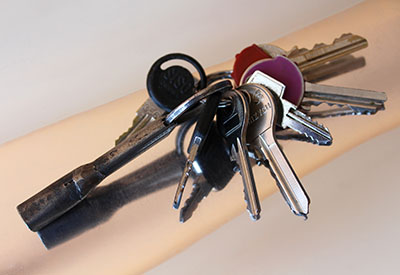 This type of key is called tubular or barrel interchangeably. It features a cylindrical, hollow shaft and is generally rather small. They are usually used to open locks mounted on bicycles, vending machines, and other similar devices.

These keys are easily recognized by their two or four sets of teeth. Logically, more sets of teeth mean more security and more durability. Locks using these types are harder to pick, and they do not break as easily themselves. Usually used on home locks, double and four-sided may also be used with sheds and other settings in which more security is needed.

The classic keyhole icon made up of a circle and a cone come from this type. Warded locks are what they open with their cylindrical shaft and single tooth—such locks are no longer used, though, and thus this term now commonly refers to a device that can open all locks of a specific type.

Most cars manufactured after the mid-nineties will have a programmed transponder. It has an electronic chip, and a radio signal emitted from the car will confirm its validity when it is inserted in the ignition. Transponders need programming in order to ensure that they will function with the car, and as such car key replacement is more difficult than regular replacements. That being said, emergency car key replacement is still an option, allowing for unfortunate car owners to enter their car without too much delay if it is lost.

Often taken for granted and branded unmissable everyday items, these devices add security and peace of mind in countless situations. The average person will use several different types every single day. Their knowledge of the functions of the items may be limited to their personal use of it, but extending that knowledge to general areas can prove worthwhile. Having knowledge of what type a key is and what it is commonly used for makes it easier to have it replaced should it be lost or stolen.